The main aim: to see and depict Baikal during the unique period.

The price of participation in expedition(comfort class):

The program of the expedition:

(Start of the expedition and the first option of participation)

Embarking and accomadation on board the motor-ships

Tourist settlement Listvyanka is located on the southwest shore of Lake Baikal, 65 km away from Irkutsk, at the source of the Angara River. The city and the settlement are connected by picturesque asphalt road.

An hour later the next stop «Bolshiye Koty»

Bolshiye Kotya settlement situated on the western shore of Lake Baikal, 18 kilometers (11 mi) to the northeast of Listvyanka. The history of the settlement is closely tied to the beginning of gold mining near Baikal in 1842.

There are several versions of the origin of the name Bolshiye Koty. According to the dictionary by Vladimir Dal, "koty" means a trap for fish installed at the mouth of a river. Alternatively, the name of the settlement comes from the word "Kotky", or "Koty", a word used to call wooden shoes worn by "katorzhnik" – a forced laborer in katorga camps. For half a century in the area of Bolshiye Koty extracted more than 160 kilograms of gold.

Overnight stay on board the ship in Sennaya Bay.

The waterway is 160 kilometers

the beginning of options №2 and №3)

The beginning of options №2 and №3

Cape Ryty is located in the Central part of Baikal on the West bank opposite the widest point of lake Baikal. There are no settlements, roads and even a trail along the coast. Locals studiously avoid visiting the cape calling it a cursed place. Something unexplicable still happens in Cape Ryty but the nature of it is still not clear for people.

Cape Pokoiniki is located in the northern part on the West coast of the lake at the foot of Baikal range. On the old map which was one of the first the cape has a name Cape Pokoiny. The fold near the Cape was called Pokoinaya. Then the name Pokoiny has gradually changed to terrible one – Pokoiniki (lit. decedents). These days Cape Pokoiniki is the part of Baikal-Lena Nature reserve. There is also one of the oldest Baikal meteorogacal stations called “Solnechnaya” and cordon of the reserve.

In 1962 after the world’s first discovering of microquarzite which is an abrasive material of very high durability used for mirror polishing of metal the enterprise "Baykalkvartssamotsvety" built a Settlement for geologists near Cape Zavorotny. These days only a few people live in the Settlement.

"The transition to the east coast" 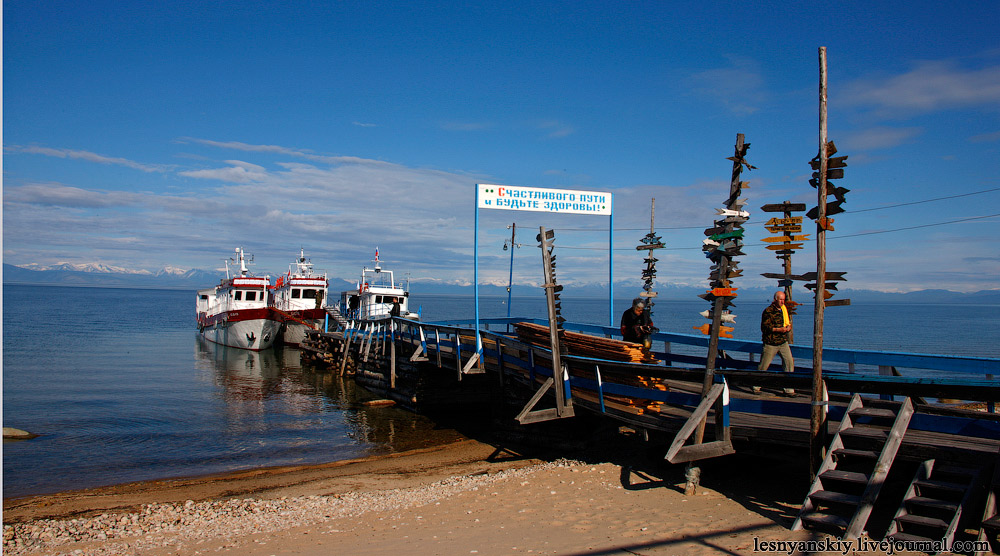 The rocky shores of the islands are rookery of the unique Baikal mammal Baikal seal or nerpa. The largest Baikal rookery of nerpa is located on the western side of Tonkiy Island. According to scientists, the number of nerpas at the rookery ranges from 2,000 animals and it hasn’t changed since 1934. Nerpa is cautious. If one speaks loudly and makes noise approaching nerpas, they dive from stones. Usually there aren’t nerpas at the rookery right after storm or in case of waves on the water (as an option you can visit the island at an additional cost).

There are 15 rocky islands on Maloe More (the Small Sea) including Olkhon Island. The islands Zamogoy, Ogoy, Oltrek and others are the largest of them.

Shaman Rock is one of nine shamanic shrines of Asia earlier called the "Stone Temple." A cave in the rock of this cape which is also called Shamanka is the most revered sacred place on lake Baikal. People have been making sacrifices and vows to the roch since the appearance of first shamans.

(end of option №2 the beginning of options №4)

If there are no waves on the water sightseeing stop at White Marble Rock “Sagan-Zaba” and viewing of rock paintings (petroglyphs) of III-V centuries AD are possible on the way. The academician Okladnikov says: “petroglyphs of Sagan-Zaba are the real pearl of ancient culture and art of the peoples of Eastern Siberia. They are the most complex of all known rock paintings in the entire territory from Ural to the Pacific ocean due to their composition, writing and diversity of scenes.”

Peschanaya Bay is famous for its stilted trees and spectacular sea views from the surrounding cliffs.

Day 11, 4th June «Listvyanka Settlement. The end of the expedition»

Tourist settlement Listvyanka is located on the southwest shore of Lake Baikal, 65 km away from Irkutsk, at the source of the Angara River. The city and the settlement are connected by picturesque asphalt road.

If you go to the lake in the summer, keep in mind that the temperature can be from +10 at night to +30 in the afternoon. Therefore, we recommend taking light clothing as well as warm clothing. In winter, the temperature drops to -30 degrees, so it is strongly advised to take warm clothes sets, thermal underwear and thermos. Also take with you a first aid kit and, of course, a camera. There are so many places at Baikal worth picturing that memory cards happen to be full at any moment. So extra memory cards along with extra batteries will help.

Whenever you intend to visit Baikal take sunglasses and sunscreen. They will be particularly needed in spring period when the sun reflects from the clear ice and snow so your eyes and skin should be properly protected.

Repellents should also be a must-have. There are few mosquitoes (gnat) and in most cases it is not more than weary companions. But an individual reaction for gnat bite can take place so put a repellent and after-bite in your bag to keep on the safe side.

There are ticks infected with Lime disease and encephalitis in all Siberian regions. However, for the last years no encephalitis outbreaks took place in Baikal region. Usually the danger of tick bite is exaggerated.

Number of people in group:unlimited